ASPIE was represented by member Jessie Burden as Cllr Jabba Riaz’s Consort for the Day on 23 June.

‘On 30th June I was lucky enough to be the Councillor Jabba Riaz’s, Mayor of Worcester, consort for the day. This involved accompanying him through his busy schedule. We attended five different events and I’m told that number is not uncommon during the summer months.

Everyone I met during the day was incredibly kind and friendly. As a fan of Antiques Roadshow I was a little starstruck to meet Henry Sandon – an expert who appears on the show. This was at the second event of the day when we went to the opening of Henry Sandon Hall at Worcester Royal Porcelain Works.

I am very grateful that the Mayor allowed me to be his consort for the day. I was impressed how he took time out of the busy schedule to give me advanced warnings on when I might get overwhelmed by intense sensory input like camera flashes. I had a great time and it truly was a day I won’t forget anytime soon.’ 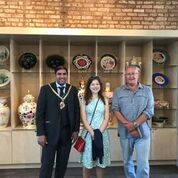 Official opening of the Henry Sandon Hall at the Royal Worcester  Porcelain works.

ASPIE alive and kicking but differently for the time being